81 days in chastity, and shopping for Goddess’s boyfriend 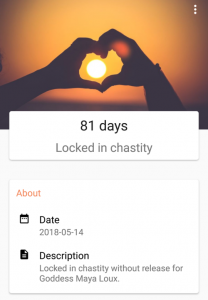 It’s Friday and I’m glad the week’s over, it seemed to last forever. Goddess played with me a little during work today. Only she is allowed to initiate phone calls, and she kept calling and hanging up before I could answer. I love the sound of her voice and our conversations are always great. It’s fun play like that I really enjoy, and it’s what I mean by 24/7 D/s. It was totally non-sexual domination around a normal, every day thing.

She did eventually call and chat for a few minutes before going out for the day. Her voice was like heaven, especially during a long stressful week like this one.

Goddess and I have long talked about more ways to interact, so this month I bit the bullet and bought a Hush and an Edge. She’s always talking about some internet controlled shocking device, which I also find incredibly hot. It just seems nothing is really on the market and I can never find the time to build one. It doesn’t seem like it would be difficult using an Raspberry Pi or something. Anyway, I’ve tested the Edge and discovered I might be in over my head.

First off, the Edge is bigger than I expected. It tickles my prostate just being inserted. Walking becomes an exercise in frustration. Second, it’s quiet enough I could wear it at work. Just thinking about Goddess being able to reach out and violate me like that any time… mmmm. As far as the vibrations, it’s pretty strong. I tried it out a little and discovered it’s intensely frustrating. I was dripping in my pants within just a couple minutes. I haven’t tried the Hush yet. It’s size is intimidating, but that’s why I bought it.

Goddess and her boyfriend both have birthdays this month, and I’ve been tasked with getting them both presents. Honestly, I enjoy helping her figure out presents because I know it’s something she doesn’t want to mess with. But it’s a special kind of cuckolding to buy her boyfriend, the same guy who spanked me, a birthday present. I’ve provided Goddess with some options to choose from and I’m hoping she likes them.

No Tweets available. Login as Admin to see more details.

This may be a good place to introduce yourself and your site or include some credits.